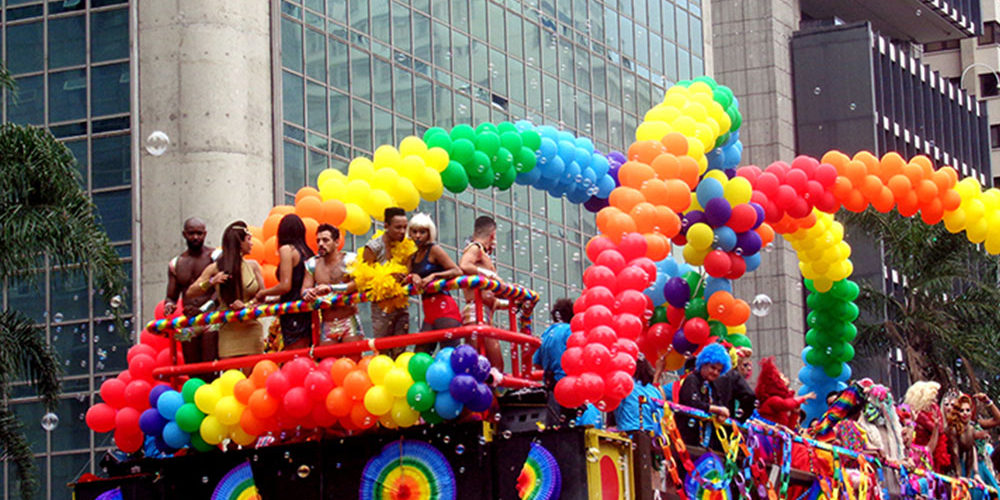 From the most beautiful monuments, parks, museums and great restaurants to the energetic and lively nights, Sao Paulo has it all.

You will find out why São Paulo is known as the City that never stops.

Top-rate nightlife and restaurants and impressive cultural and arts scenes. Most of the wealthiest people in Brazil live here.

Some of the most interesting tours of the city are in the Center: the Pinacoteca of State, the Portuguese Language Museum and the Municipal Market can be combined on the same day. It is worth to contemplate the Paulista avenue of two opposite viewpoints: The Terrace Italia and the Unique Hotel, from more sophisticated shopping to the streets specialized in bargains such as José Paulino, 25 de Março and Santa Efigênia (places for less prices).Be enchanted by its unique charisma and a kind, courteous population, charmingly unused to tourists.

Pride of São Paulo is a LGBT parade that has been taking place since 1997 on Paulista Avenue, in the city of São Paulo, Brazil. In 2018, the event brought together about 3 million people on Avenida Paulista to claim rights reserved to the LGBT community, whose main subject was the election and the importance of electing rulers who fight for the LGBT cause in politics. In 2019 the pride will be on June 23rd.

HOTEL: Melia Paulista – Ideally located, on the famous Paulista Avenue and in front of the Consolação subway station. The hotel is 500 meters from Trianon Park and the São Paulo Art Museum – MASP.

SIGHSEEING CITYTOUR: Safe and comfortable way to explore São Paulo is by a touristic bus that goes to the most important touristic attractions and interesting places of the city.

SIMCARD: You will be connected to the internet throughout your entire trip, with access reservations so you do not have to print them.  You have voice * and unlimited data *, with no daily allowance limit |EasySim4u will give you 24 Hr service and support in Portuguese |You will be connected before your landing.

TRAVEL INSURANCE: The main coverage that insurance usually offers abroad are – accidental death and medical care, cancellation of travel (in cases of travel outside your country), legal assistance, loss and delay of luggage, medicines, dental care, repatriation, extension hospital stay and hotel rates, round trip to a relative, among others.

WALKING TOUR: An LGBTT community in São Paulo is much more than parties and nightlife – we are also culture, diversity, relationships and public policies. Passing through more than 10 different points of the city and contextualizing its importance to the community.

TRANSFER: Private transfer in / out for comfortable and safe transportation.

Arrival: Transfer from Airport to Hotel Meliá Paulista. Meet our dedicated Costa Brazil Concierge guy, he will be at the airport to greet you and take you to your hotel. Our Concierge guy will be available from your first to your last day to give you the support you need and give you some tips about the city.

You will have the rest of the day free to enjoy the afternoon and the Saturday night in the city.

Day for fun: On Mondays, the Liberdade neighborhood has a local fair. It is known as the largest stronghold of the Japanese community in the city, a community that is considered the largest in the world outside of Japan. The imposing construction of Sé Cathedral marks the center of the city and the ground zero of São Paulo, in Praça da Sé. The interior is surrounded by stained glass, mosaics and works of sacred art, as well as a large organ, considered the South America.

After 5pm, we invite you to visit “The Week”, the biggest LGBT party in the city, with various environments: two dancing areas, pool, four bars, lounge, and smoking area.

Day for Culture: Eat a good breakfast in the hotel, and go walk around Paulista Avenue. Walking aimlessly is enough to enter the climate of one of the largest cities in the world. It is worth to rent a shared bike to go through the new cycle path that cuts Paulista from end to end, the avenue is always busy.

Do not miss the chance to visit Livraria Cultura in Conjunto Nacional, one of the largest in the country. When walking, look for some famous graffiti, such as the great image of Oscar Niemeyer by Eduardo Kobra. Then visit places such as Itaú Cultural, FIESP Cultural Center and Casa das Rosas, where a coffee in the middle of the garden is excellent!

São Paulo Museum of Art, MASP, which offers one of the best art products in Brazil. Among the works of the museum, national names such as: Candido Portinari, Di Cavalcanti, Anita Malfatti and Almeida Junior stand out. The international art is represented by: Rafael, Mantegna, Botticceli, Delacroix, Renoir, Manet, Monet, Degas, Cèzanne, Picasso, Modigliani, Toulouse-Lautrec, Van Gogh, Matisse and Chagall, among others. TIME TO LUNCH – Have lunch at the Uni-MASP restaurant, located in the MASP basement.

Day for taste flavors from Brazil. If you are the type that likes to bring new flavors home, the Mercadão is the right place! At each booth, new products come up and many are offered for tasting. Do not miss the chance to try exotic fruits, delicious sausages and spectacular cheeses. From there, it is possible to buy fruits, vegetables and fresh vegetables; all kinds of cuts of meat, fish and seafood; spices, seasonings, sauces and olive oils; grain and quality grains. Do not forget to try the Cod Pastry and the Mortadella Sandwich.

Who is looking for incredible shopping on March 25 with unmissable prices? It’s best to have fun with the offerings, go into the most unlikely stores, try some unusual things, and laugh a lot at the abundance and variety of objects you’ve never seen in your life (but you’ve come to think they were much needed). Without forgetting that prices are even attractive, and it will be difficult to leave empty handed.

Day for look around. Art in São Paulo is not restricted to museum walls. Just walk the streets to find works of art stamped on the walls. Graffiti is everywhere, but there is a place where their concentration is much greater. The neighborhood of Vila Madalena is a delight for those who enjoy the colorful and intense traits of street performers. One particular corner, called Batman’s Alley, gathers dozens of work and makes beautiful clicks.

Stroll through Oscar Freire and Augusta. The two streets are almost antagonistic, but equally traditional. Oscar Freire draws attention to the upscale shops, fine dining and more affluent public. Augusta Street attracts a good supply of alternative shops, cool people, lively bars and nightclubs for all tastes and flavors. Both are great for those who enjoy exercising the art of people watching. These are very different tours, but certainly interesting ones. To enjoy the best of each one, visit Oscar Freire by day and Augusta after dark.

Day off. Corpus Christi is a holiday celebrated by the Catholic religion; this date is celebrated annually 60 days after Easter.

Tip – LGBT Cultural fair of SP. Pre-Parade Tradition and part of the official program of the LGBT Parade SP, happens all day in the Anhangabaú Valley, with shows, presentations and 64 commercial tents with products from the most varied segments, such as fashion, accessories, books, shoes, perfumes, arts plastic, decoration, music, video, esoteric articles, among others, besides food court. From 9am to 11am, there is also the Cãominhada of diversity, where the dogs go for a walk.

Day for sightseeing: Day of your City Tour (3:30 hours Tour), the bus passes through the Pacaembu stadium, where is the Football Museum; Follow Avenida Paulista, where you have the biggest stop of the avenue, next to the MASP, and further to the end, in front of Casa das Rosas. The Bus will take you to the Ibirapuera Park, returning to the Center with stops at the Cultural Center of São Paulo to the Eastern district of Liberdade. The Bus will continue its way to the Courtyard of the College, where the city São Paulo was born, the Municipal Theater, returning to the Republic Square. At every point is a 10 minute stop.

Event Tip:  “Blowout by San Sebastian”. The LGBT + house of Salvador San Sebastian bring your party to São Paulo with an event with DJ, block parades and famous Brazilian singers. The Blow Out event was created in Salvador in 2016, on the anniversary of the house. The group also runs San Island Weekend (want to know more, check out our exclusive package for this event in May 2019).

Day for LGBT Walking Tour: In a partnership between LGBTT.ME and the Museum of Sexual Diversity, the tour tells a bit about LGBT + history in São Paulo, passing through more than 10 different points of the city and contextualizing its importance to the community. The focus is the central region, passing through the AroucheWide, Museum of Sexual Diversity, the ballads of Augusta Street and the Shopping Frei Caneca, among other stops. The guides will be identified with colored umbrellas and accept tips at the end (at your choice).

Event Tip –“Milkshake Festival Brazil”.  Traditional Dutch festival returns to Sao Paulo, the only place where it happens outside your home, Amsterdam. There will be 16h of music in 4 stages, with national and international artists and of DragCon Brazil.

Day of Pride. On Sunday, June 23rd, the biggest “Gay Parade” of the World (outside the events are known as “Gay Pride”), the Parade LGBT SP 2019.The concentration begins at 10:00 AM in the MASP and the first trio leaves at 12:00, followed by Avenida Paulista and Consolação Street. The last trio arrives at Consolação Street at 6pm.

Check-out – Transfer to the Airport.

Time to say goodbye to old and new friends, pack and go with a baggage full of great memories.

I WANT THIS PACKAGE